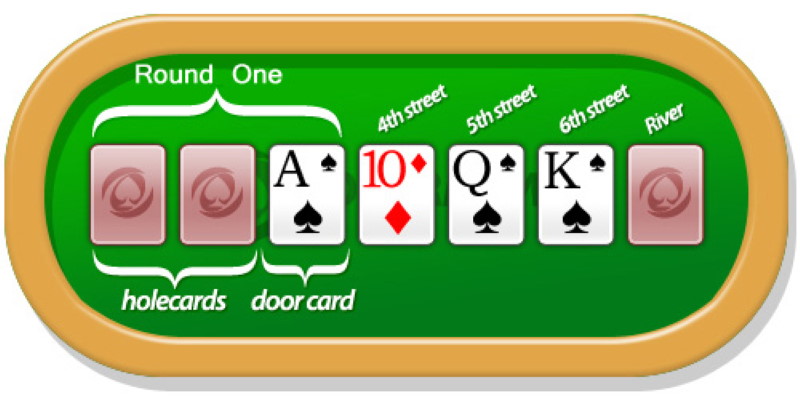 Many people sit around and play stud poker in their homes and in casinos. However, if you are mainly an at home player you may not be playing by the rules that you will see at an online poker room or in a casino. This could be very bad, if you start playing and make a big mistake that can hurt your pocketbook. The best way to ensure you are ready to play is by learning the rules of stud poker. All casinos offline and online use the same basic rules of play. This article will give you the basics for playing 7-card stud poker, even though there are other varieties such as 5-card stud poker.

The way in which the game of 7 card Stud Poker is played is that each player begins by putting the ante in the center of the table. This is normally a predetermined amount of money set by the casino or online poker room.

Once everyone has anted the dealer begins with the player on his or her left and deals two cards down and one card face up to each player. The player that has the lowest card face up begins the betting, known as the “bring in”. The betting goes around the table in clockwise fashion until every player has made their bet with each player either calling, raising the bet, or folding.

After this round of betting, the dealer deals the fourth card to every player that is still in the game, meaning they have not folded. Now, the player with the best hand showing begins the betting. Then the betting goes around the table again with players once again calling, raising, or folding.

The players after this have another round of betting and then show their hand, known as the showdown. The winner is the one with the best 5-card hand. Each card that is dealt is also referred as street such as Fourth Street instead of the fourth card and so on until reaching Seventh Street or the seventh card.

Of course, this is just the basic game play, in order to play poker well, you must learn all about the rankings and what hands beat which hands. You may think that you have a great hand just because you have 2 pair, however, if another player has 3 of a kind or a full house, you will loose. The better you are at learning the rankings and the way in which to play the various types of poker games, the more likely you are to bring in some winnings.